On Christmas Eve we told Heidi Anne to go to sleep so Santa could come. She looked at us with the biggest, saddest puppy dog eyes ever. She then said "Momma, Daddy, Santa forgot about me." We asked why she thought that. She replied "Today was Christmas, we went and saw Grandma Lori, K-Bug, Nana, and we opened presents. Today was Christmas and Santa forgot about me. Tell Santa I sorry. I will be a better girl next year and then I will get my bike."
Can you say heartbreaking? We couldn't convince her that Christmas was the next day. On Christmas morning we tried to get her to go downstairs to the tree. Again she professed "Christmas was the other day, no things for Heidi Anne."  (Insert the saddest pout a three year old can have). We said, "Well, did you want breakfast?" That got her to head down stairs.

As soon as she saw her bike she squealed "SANTA CAME,  Santa Remembered ME!!!  Momma, Daddy Santa came back and he visited me!" She had asked Santa for a "Big Girl" bike, a pink stroller for her Ana Rose, and an iPad. Santa helped by saying they don't make iPads at his workshop, only toys.
Three cheers for Santa!
I must tell you that many of her presents wouldn't have been there if it weren't for those great and caring people who helped to make our little girls' Christmas possible. Due to so many medical bills and cost, we weren't going to be able to afford a bike for her, if much else. 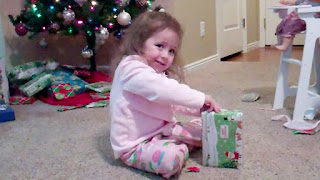 Since we didn't have much we got her some of her favorite food treats. For example, fun shaped maccaroni, or other such "fun food". We were a little worried we may have the "Jimmy Kimmel' Terriable Presents" incident, which you can see on Youtube. Anyways, she LOVED it.
I have this habit of wrapping up presents in fun and sometimes difficult ways. I learned this from Char, who likes to use newspaper and duct tape. On top of that we reuse boxes to make wrapping easier, so a word of warning-whatever the box says it is-doesn't necessarily mean that's what is really in the box.

We would ask Heidi Anne what she thought the gifts were as she opened them. She would make guesses and then be surprised. My favotite response from her was this little converstation:
Daddy: Heidi Anne, what do you think it is??
Heidi  : Well, I know it's NOT a Bike.....See my bike is over there.

She adored every gift and wanted to share most of her presents with her Ana Rose. 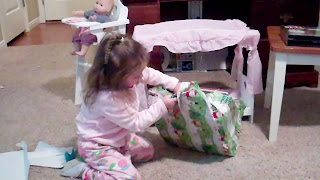 This year we got her lots of games and puzzles. She's always enjoyed puzzles but she loves to play games now as well. Some of them maybe a little to old for her, when we play those games she gets to be on either Momma or Daddy's team, this way we can teacher the game but still have it move smoothly. We've played a game together everyday since she got them. Her favorite right now is "Guess Who?" 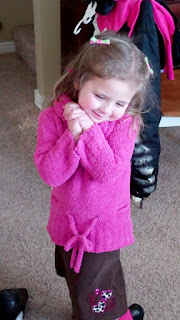 We just put Heidi Anne to bed about 10 mins ago, So we were

We got up at our normal 6:30 am. The night before I just barely added the finishing touches on Heidi Anne's new blue dress. Our original plan was for her to wear a more festive looking dress. But she feel in love with the blue dress Momma made. She loved the colors and how it puffs out when she twirls.
We left around 8:30 and went to go visit my friend Valerie on the way to SLC. Heidi Anne was in high heaven as Valerie has twin baby girls, Heidi Loved playing with them, keeping them happy. It's also fun with her twins, as I got to hold and play with a little baby too, thus Heid Anne and I didn't have to fight over the babies. Hehe.  After a little visit we were off again.

Off we went to go see Char's folks before seeing my family. On the way Heidi Anne yelled out SANTA!! What do you know she was right. Santa and Mrs. Clause were going down I-15 on a Harley--take that Rudolf!  (Note the lack of helmets....)
We dropped of our gifts to his family and spent some time with them. While we were there we did Char's family tradition of having Mini Pizzas. Heidi Anne was more then happy to sample the toppings to make sure they were in the best condition. 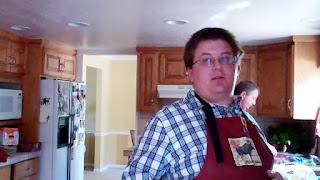 Since we were there, everyone got to open their gifts from his folks. Heidi Anne received some books and a stamp set. My little girl always wants a story to be read and she is a fan of crafting as well. She was thrilled with the stamp set and couldn't wait to open it. She was doing stamps in no time.  As for the grown ups, we got a vacation! She didn't seem to trilled at the time, (maybe it was the fact that it appeared as a piece of paper she couldn't stamp). However, she is going to absolutely enjoy that adventure, once we get time to take a vacation. 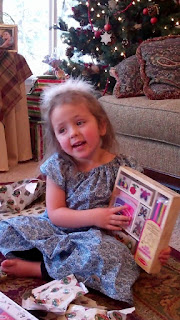 Then we were off to Grandma Lori's and Grandpa Mays' house. We had a wonderful turkey and pot luck. Afterwords, we got to open more presents! One of my favorites was this lovely hair bow holder. I saw it on Pinterest and it was on my wish of things to make. Grandpa May made matching ones for both the girls. Grandma Lori picked the hair accessories. It is already hanging up in our bathroom and many of the bows have been tried out and examined in the mirror by Heidi Anne. She looks "Beautiful". 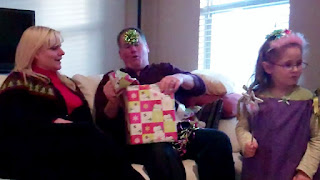 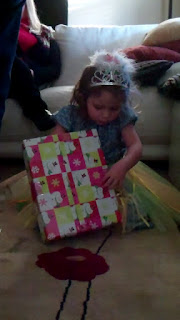 Grandma Lori knows her little grandkids. She got the girls coordinating tutus and princess crowns and wands. They love them! They just had a ball showing off their pretty outfits. 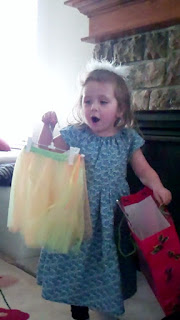 As for the grown ups, we got a 72 hour emergency food kit and first aid gear. The guys got a cool Swiss army keychain. We have the kits in our car-because chances are that's where we'd need it the most. You hear of those stories-so and so was stranded for 3 days and lived off of expired cliff bars and snow. I would much rather have some actual food, an aid kit, and just skip over the fearing for my life part. 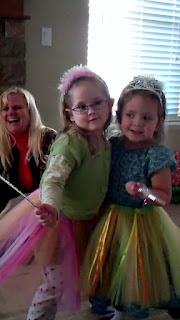 To top it off, my sister got Heidi Anne a Rapunzel dress. She even did a pageant style walk to show it off for us.  PS-She wore Rapunzel ALL Christmas Day.
1 comment: 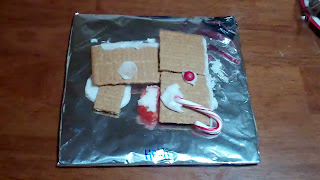 Heidi Anne made it, we think it could be a foundation for a gingerbread house or maybe a bomb shelter....
Not sure what it is 100%-but we're open to ideas.
No comments:

The Holidays at Work

Have I mentioned I love our office? We are allowed to decorate for the Holiday season, we even have contests too, like most eco-friendly, ect. As you can tell we really get into the holiday spirit. Here are a few pictures of different teams Christmas Decor.
Even Squirrel and Squirrel Junior (On Ronnie's team) got into the spirit of things. I think Squirrel Junior looks the best! He has a cute little scarf and hat.
Most of us joined in on a "Ugly Sweater" contest. No prizes were given out, it was a more just for fun thing. Some of the sweaters looked like what you would expect a elemntry teacher to wear, thus it's funny in an office setting. Others spend many long hours working to make their sweater just the right level of "ugly". I call it creative (but I wouldn't wear it out in public-just Walmart ;D )
Maybe we should do prizes next year with different catagories.
Our team had a fun white elephant potluck party. I made Cookie Dough Balls. It's cookie dough you can eat without any fear of salmonella. Love it!! Joanna made a spinach / artichoke dip, Cori made a Cranberry Salsa with cream cheese,  Ronnie made homemade puff treats. As you can tell, we had quite the selection. Oh the white elephant game was just a blast! I didn't get many pics because I was having to much fun.