#356--I have 1 week left. My goal was to not swear at all. I realized I've let a few words slip here and there. However, it became obviously clear one morning in the beginning of February when I spilled some milk. I then cursed under my breath. It was promptly followed by Heidi Anne looking up at me and saying "Elll?" Then wandering around the house chanting the new funny word, of "Ell, Ell, Ell".

#375--Let sleeping toddlers lie. Night Clothes for Children are not required every single night, especially if they've already fallen asleep. Sometimes those brown ruffled pants and the pink jacket are more comfy to a toddler then the footie pajamas. As long as their clean--why disrupt them?
1 comment:

The Adventures of Hunter and Heidi Anne 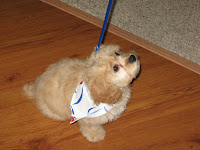 So here are some of the little Heidi Anne adventures for the week:

At preschool she was a dinosaur, she kept going around "roaring" at everyone and even pretended to have claws. She reenacted it for us later that evening, while brushing her teeth she went around the house with a foamy toothpaste mouth saying "Roar".

Heidi started dancing to the music, then realized that her dancing was making a little baby laugh, so she kept dancing for the baby even after the music stopped.

Heidi has a new game, she likes to take pictures of people, but if you try to get one of her, she says Cheese and then runs away before you can get a shot. Sneaky, Sneaky girl.

Heidi is now telling us when its her bed time. We have a night time routine in place now, so when she and Char get in the rocking chair, she starts to say "Nigh" "Night" and will point to her bed. We put her down, tuck her in, and out she goes.
No comments:

Morning Prep--Start the day off in clean clothing, free of obvious signs of staining, and no tares or holes. Teeth brushed and Hair combed. (Bonus points given if hair styled any more then that). Feeding when time allows for it. This goal can apply to all ages, as the tale details below:

Heidi Anne likes to help pick her clothes for the day now. This morning I had a pink shirt and green pants set out for her. She chose a different pink shirt, a different shade of pink pants, with another shade of pink sox's.
Yesterday the outfit was a pair of jeans and a shirt. She decided it would be a green shirt, purple pants, and a stripped jacket. When we headed out for the day she insisted on wearing her other jacket as well. So she went to preschool with 2 jackets on and a purple coat in tow.
1 comment:

Not The Only One

I'm not the only one with a sense of humor when it comes to parenthood. My sister has the same attitude. As the dialogue below so artfully illustrates: "Kailah sweetie that's toothpaste, not lotion. It goes on your toothbrush please stop rubbing on your arms." She's an awesome Mom!
No comments:

So I have come down with a case of laryngitis during which Heidi Anne has become quite the copy cat. I would tell her "Say Please", but thanks to the laryngitis hardly a whisper could come out. Heidi Anne would mimic me, right down to the barely audible tone. Then Char would tell her "Say Please" and she would then respond in her normal voice. It really made a unique spin to losing my voice. Poor Char had to strain to hear whatever I or Heidi Anne were saying all weekend.

Heidi has a new favorite game, she LOVES Ring Around the Rosie's, mainly the "We all fall down" part. She will even skip right to that part of the song. Her friends will tell her, "No Heidi, you have to dance first." So she will dance a little, she'll let us get to "Pockets full of Poises" and then yell "DOWN!!" And she'll plop right down in a mass of giggles and saying "Again! Again!"

I'm having fun with London Bridge is Falling Down with her, every "Down" she flops to the floor and hurries to stand back up so she can just fall down again.
No comments: