I One thing I love about this age is how honest little kids can be, they aren't trying to be rude, they just call it as they see it. Heidi Anne's new catch phrase is "See, I told ya." She says this when something happens or someone does something she warned about.

"Hey, the cat is going to knock over my drink on the floor." Que cat accidently knocking over the cup while playing about an hour later. We hear from her room upstairs "See, I told ya'!"
It's nice to know, in a weird way, that she isn't just up front with us. She does it at school. When playing with her friends, she'll warn of impending doom or that snack time is coming up. When it does she say's proudly "See, I told ya!"
See, I told ya. 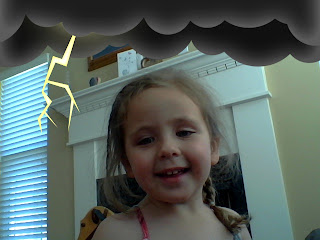 Lately Heidi Anne loves to have "Katniss Hair". In case you don't know Katniss is the heroine in The Hunger Games. What is Katniss Hair you may wonder. Well, Katniss has a cool French braid that goes from one side of her head, traveling along the back of your head the whole way. Once your on the other side of your hair you make it into a normal side braid. (I know, very intricate hair style).

One of her teachers asked Heidi Anne why she loved having Katniss Hair. She promptly responded, "Katniss is brave and when I have Katniss hair it makes me feel brave, too."

Take that Bella there is a new role model for gals. Sure Katniss is on the slightly violent side of things but I will take that over a whiny girl any day. 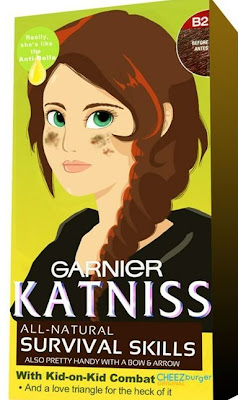 A few month's ago, my friend who's done blogs since before they were popular, didn't blog for like 3 weeks. She said she had writer's block. I was very puzzled by this, she always had things going on, memories to preserve, true and honest feelings to share, two sweet little girls always doing something. But she was blocked.

Well, now I understand. Sometimes life happens, but you aren't sure how to explain it from mind to paper. Sometimes, things happen, and you don't want it saved. You just want to hit delete-erase those memories, the sorrow, the pain. Because if you write it and hit print. It's there, forever, in writing, somewhere on the interweb, or deep in your mind and heart.

So I am going head-first. Yes, I have used many a tissue (and I don't cry easily). There, that is your warning (More so for me).

Last few weeks have been hard, I have a change in meds-which is fun. Enough said.

Heidi Anne has been wanting her kitten for nearly a year. The kitten we promised her, the one that once she was potty trained she would get. So since she is nearly 4, and she had been asking twice a day everyday (very nicely). We found a perfect orange kitten (that was one of the "demands"). It was to be orange to go with the other 2 black cats we have.
We found "Lily" - properly renamed "Pumpkin", and her sibling "Avi", renamed "Boo" came along as well. We get Heidi Anne from daycare to find the kittens in the car. The next morning "Boo" seems a little off, Saturday, something really seemed off with Boo. We talked with the shelter, only to be told that their brother was adopted recently, and is at the vet. The shelter gave us some antibiotics for our Pumpkin and Boo.

After the second dose, poor Boo went downhill, and fast. Wouldn't drink, couldn't eat, sneezed, and sneezed, and won't move. Not good and heart wrenching. We take Boo to the vet. The vet teats little Boo so symptomatic, gives us kitten ICU food, meds for both kittens, and instructions. Ways to help them breath, stay warm, help their noses, ect. They suggest we call the shelter to see if we can get more history on the kittens. Strike 1

I call the shelter to get more info on them. All they know is they were found in a field, maybe ferral cats, but alone in a field. Just before I end the call I am told their brother, who was adopted a little before them, had just died. He had gone to the vet, and unable to revive him-not 100% sure what it was, distemper, cold, they don't know. Strike 2

The last 7 (10?) days have been a battle. They both take a nose dive. It's been a battle to get them their meds (which only Char can do because I'm allergic to their meds). We feed them with a syringe.Water, meds, gatorade, food. --Yes, you can feed kittens food with a syringe. It's been an up and down 2 weeks. We make some progress just to drop down. Boo became known as Scrappy. Just losing weight and little cuts aren't healing. (Scrappy Boo fights when we try to do anything for him, feed, meds, just scratch himself.) Pumpkin has become more chubby and exploitative. Ball 1

We thought Scrappy Boo was turning the same corner. Until last night. Won't eat, won't sleep, just there. Tonight I have to add won't drink, meow, or really move much to the list. Worst part, Heidi Anne realized or voiced what we wanted to avoid. Her little kitten won't be around much longer. We cuddle her, she cuddles her kitten, and everyone cries. Strike 3. We all cling to Char, who is now "Daddy-fixer of all things-and has to be strong-because we're ALL clinging to him."
So little Scrappy Boo is now laying beside me. As I tell his little tale. At least someone will remember the little kitten, who was so loved and wanted by a little "almost" 4 year old girl. Now we wait. My little girl has cried herself to sleep. I wonder if he'll make the night (wishing like nothing else their was a 24 hour vet in the valley that doesn't cost an arm and a leg) and sick to my stomach of what if he does or doesn't make it through the night. Sadly I feel this is GAME OVER.

PS-A little heart broken girl is one of the somberness things I have ever been through. I hope and pray she won't have many of these heartbreaks. It rips at us like nothing I've ever felt. Another box of tissues please.
1 comment: