Realize that Heidi Anne will never come inside this summer. I need to give up and just invest heavily in sun block, bug spray, and maybe a tent. How did I get such an outdoorsy kid?
I foresee many nights stargazing, campfire cooking, and little hikes in the near future. However, as for the more adventurous stuff--well that will most likely be a Daddy-Daughter camping / bonding opportunities (while I am at home with the electricity and running water) ;D 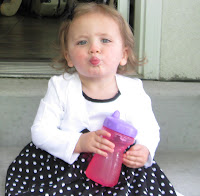 Fun, busy weekend! My Dad and Lori were married, since we were part of the wedding party, this are some unofficial pictures taken between the real pictures. (And before my camera died). More pictures to come I am sure! Great thing about weddings-everyone is taking pictures!! 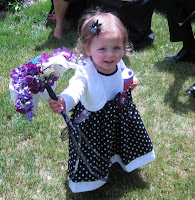 As soon as Kayla saw me the first thing she said was "Where's Heidi?
During the ceremony Rekailah was so good, she stood still and quite right by her Mom. Heidi Anne went with Charles-but then came over to our side of the line, and then decided she liked being the only girl, and went back to her Daddy. (At least she was quite about her indecsion).
Heidi Anne was just adorable, but I must say extra points have to go to my sister and her Kayla. Kayla had her hair in little curls and with the matching dress the girls had Kayla looked like Shirley Temple. 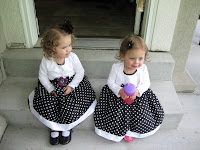 After the ceremony the little girls found the funniest place to be was by the back door. I guess for 2 year olds it made perfect sense. It was right by the music, near the wedding line with all the people that were dressed up, close to the kitchen (which was where the goodies and their Mommys were), and soo many people would walk by. 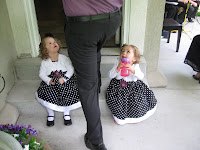 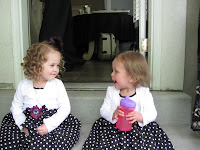 Every time someone walked by the girls would stop talking, let the person pass between them, or around them, and then start giggling as soon as the person left. Or they would carry on their conversation where they had left off. A lot of people would ask if they were twins or at least sisters. 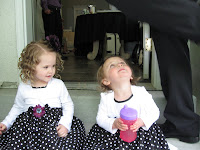 After a good treat, and Heidi Anne's first soda ever (which is why she is not letting go of the sippy cup-she is in LOVE with the Sprite Lemonade Punch), their wedding day adventure continued. They played by the little water fountain. We got some more family photos done. 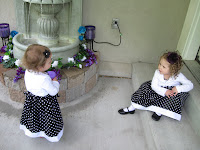 They just enjoyed playing and running outside together. It's been rainy and snowy so the nice warm sun was wonderful. 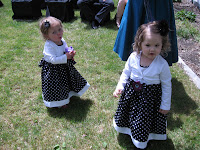 And then someone (not sure who-but they were genius) brought out some bubbles. Those two little girls had a ball chasing bubbles, blowing bubbles, popping the bubbles. The fun never stops when those two are together. 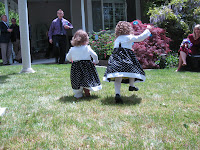 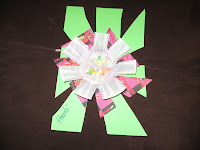 A little cute story from Heidi Anne's day care today:
They were making flowers today for a craft. Heidi had ripped her flower up (like a typical two year old). When she saw the flower one of the teachers were making she kept asking for it. So Suesue gave it to her. Heidi Anne took it, got a pair of scissors, and glue, and started pretending to make it. When she was "done" she held it up to everyone and said "Mine". As her teacher said "What's mine is her's right?" ;D
She isn't loved, is she?
No comments: 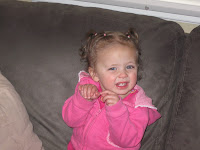 Heidi Anne has a new favorite game.
She loves to pretend she's a dinosaur. She'll raise up her "claws", she'll sneek up on something (me Char, the kitties or the puppy, the dolls, whatever HeidiAnnaSauras is after), and say "Rooaaarr." This is promptly followed by fits of giggles. Then the game starts all over again.
She makes the cutest little dinosaur ever, even if I do say so myself. 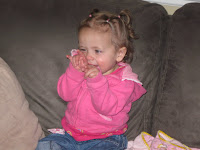 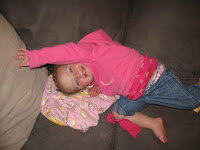