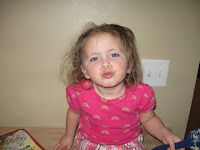 This is not the first time that she is showing worry for others well being she is known to bestow kisses and hugs if your felling sad or bad (and she is feeling generous enough too). 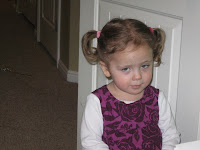 She also worries about other's belongings as well. The latest example happened at daycare when two of the teachers came in with the same boots, unknown to Heidi Anne. When one started to put her boots on to leave Heidi Anne stopped her, took them away, and said "No, those Hillary's boots!" They had to show her that they both had the same boots before she would get them back. She is so smart, caring, and stubborn all at the same time. I love it!
No comments:

So, we got Heidi Anne's report card from her pre-school that she did the cutest thing with her dolls. She held up the girl doll and said "Momma", then found the boy doll and said, "Daddy". She then had them hugging and kissing. Her pre-school teacher said "I guess she sees that quite a bite at home." Whenever we get stories like that it always brings the song to mind by Rodney Adkins I've Been Watching You..
Here is a little excerpt of the song. 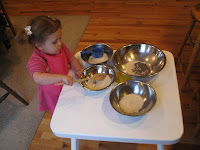 Just this side of bedtime later that night
Turning on my son's Scooby Doo nightlight
He crawled out of bed and he got down on his knees
He closed his little eyes, folded his little hands
And spoke to God like he was talking to a friend
And I said son now where'd you learn to pray like that

A Call For Stories

I am trying to gather stories of Char's and my ancestors. It all started when we were at Chars' Grandma's funeral, in the eulogy we heard some stories that he (and therefore I) had never heard before. We have tried hard to find a autobiography from her or at least a compilation of the stories that were told. We had named our daughter's middle name after her two great-grandmothers', (see the post What's In a Name for the reasoning and meaning), and wanted to give her some stories that would be an example for her as she grows up.  For example, this Christmas weekend my in-law's told stories of  why Char's namesake, and why they picked it, which was rather enlightening. Please contact me if you have any stories, anecdotes, or any thing of the sort you would like to share.
No comments:

This Christmas was one of the most amazing Christmases in recent memory! 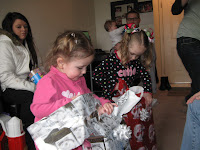 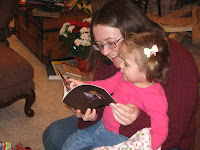 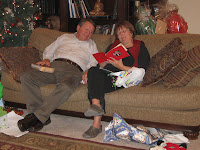 It all started a few months before Christmas when I was putting together the photo books, it was so much fun finding and gathering the pictures. I had spent twenty to thirty hours creating it and gathering the photos to put in the books, I made several different kinds for the various sides of my family. We got it finished a few weeks prior to Christmas and thought that it would come in enough time to be here for Christmas. We were told that it would be here between the 16th and the 20th. We checked every day to see if it came in. The gifts for my side of the family all came in real quick or at least on time. However, the photos for Char's side of the family seemed to be held up. We kept checking up to the 23rd at 8:30 at night, and they said that it was not there at all. On Christmas Eve we checked at the first moment that they opened, at 9:oo am, just praying they had somehow come in overnight. Low and behold they came in! 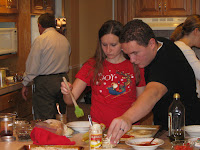 We drove down to my sisters house (luckily she let us have some wrapping paper for the gifts that still needed wraping). The whole time the two little girls played like sisters, and in general just getting into everything. They kept trying to mess up the living room of my sisters house, so they snuck off, and played with Mr. Potato Head. We even got to visit with my mom. Heidi Anne loved her gifts that she got from Bekah and Mia (Namely a pink foam crown to decorate). Unfortunately, Heidi Anne-(like many little children) does suffer from the syndrome of when another child gets a gift then she has to have it too, she fell in love with Kayla Repunzel doll, despite having the Exact same doll. Kayla was soo excited about her doll-Heidi Anne wanted it. I think when those two are together it's as close to having twin girls I'll get-but to see Heidi Anne wanting to be soo excited about another's doll was soo funny. 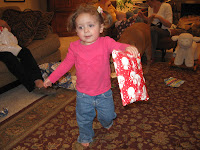 Afterwards we took Heidi Anne to go get some food for the little pizzas that night that Char's parents do- it's tradition. Heidi Anne had a ball at Char's folks'-and being the center of attention with her Aunt Sarah. Sarah interacts so well with Heidi and knows just how to get on her level-and adjust with her as she grows up. I would trust Sarah to watch Heidi Anne any time. Heidi Anne, her grandma, and Sarah frosted some sugar cookies, and Heidi did some "cooking" of her own. 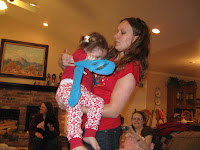 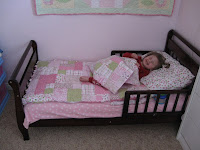 After everyone arrived we made little pizzas and they were delicious. Heidi Anne got some new nightclothes from her grandma, we got her changed into it. She had so much fun running around with her cousin Alice (who is just starting to walk a lot more, sometimes Alice gets overwhelmed with Heidi's running and giggling) Alice would sometimes double over with laughter. We got everything packed up into the car and drove home, soon after we started driving Heidi Anne asleep. I guess soon after that I fell asleep as well, since the next thing I remember is waking up to the sound of the garage opening. Char took Heidi up put her to bed. Then the elves snuck the gifts in while we were upstairs, and when we came down in the morning the gifts were everywhere. 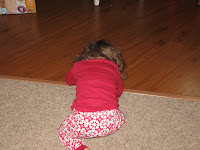 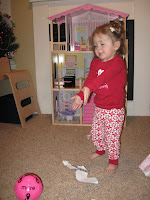 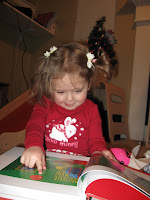 When Heidi came down, she must of been overwhelmed, because the Rapunzel doll that was lovingly swaddled in it's baby quilt was tossed on the ground. She refused to tell her doll sorry, aso she went into time out, (which is just sitting her down where she is and waiting for her to calm down). She apologized to her doll, cuddled her back into the quilt, and then she got to opening her doll house, piano, books, and various other gifts from family and friends. We loved all the gifts that were given and those that were received. :)
No comments:

Mis Adventures of My Doppelganger

We have been aware of another Melissa Wegener living here in the valley for quite some time now. It started when a pharmacy accidentally gave us the wrong prescriptions, finally after 3 years she has chosen to use a different pharmacy. We don't think about it that often, apart from the precription mix ups, and the "Hey are you related to the Smithfield Wegeners?"  That is until we got our carpets cleaned.

Rewind to this summer when we got our carpets cleaned. They didn't leave a bill, they said they would just send us an invoice, and we figured that they would send it to us. About 6 weeks later they called us, wondering why we didn't pay (gosh, wanting money), we informed them that we had never received the invoice, therefore we didn't know the amount due, so hadn't paid yet. However, once they gave us the balance, we paid it right then and there.

Fast forward  few months to now. Recently I got a voice mail from them saying they had never been paid, and that if we didn't pay the balance (which somehow the amount due was nearly triple what it was before) they were going to take us to court. Needless to say I called right away all worried. I was then informed that they called the wrong Melissa Wegener by mistake, that I had a perfect account with them and that we were not going to be taken to court any time. It's an understandable and honest mistake on the businesses part, and they were very, very sorry for the mixup. It's just interesting in a little valley of roughly 45,000 people (and half of them are 15 or younger) I have a doppelganger; go figure.
1 comment:

Putting Up the Christmas Tree 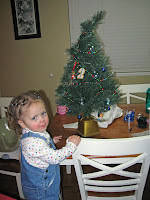 We have a tradition where every year Heidi Anne gets a new ornament (something that reflects her throughout the year.) This year's new ornament is a little girl bear coloring with chalk on a sidewalk. We also pulled out Heidi's first and second ornaments, which she just loved and treated them like they were brand new. (Always nice when 2 years later they still love their ornaments). 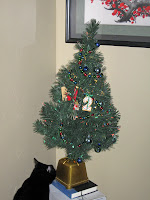 set up. Last year we had the tree up on the mantel to keep it away from the kittens, however, this year it just wouldn't fit, no matter how hard Char tried, he just couldn't get it to fit. After a few minutes of playing Janga with the tree, we decided that we needed to put on the table where Heidi normally sits and colors. We figured that the cats would leave it alone, and at worst, maybe they would knock some ornaments 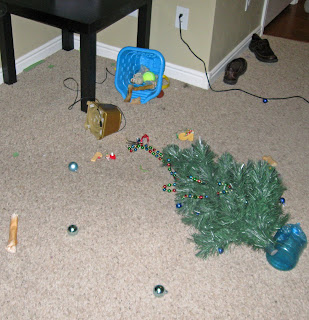 off because they were looking at the tree. We went upstairs for the night, or so they thought. Char went down for gifts to wrap after Heidi Anne had gone to bed and found the tree had been completely knocked down. Both the cats were looking at us like "Who did That? Must of been that dog...." So we

got to decorate the tree twice.
No comments:

Happy Sushi--Well It Was Takara 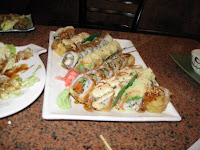 So I have long loved sushi, but thought little Logan didn't have a (well safe) sushi restaurant. Little did I know, we have 2!! Happy Sushi and Takara- I found out about them through one of my coworkers 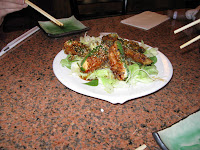 Lisa, (she is the cutest funnest girls to be around).
Anyways, to celebrate their anniversary, for 6 weeks they had a deal going on for half off sushi, thus started the weekly sushi trips for lunch. This also enabled us to taste so many different verities of sushi that we would not normally attempt (or have been brave enough) to try.
Eel sushi, spicy sushi, 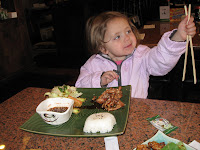 California rolls (in many different ways) octopus-not trying that one anytime soon, just about any of their fun sushi they have. Not only do they have sushi, they have the best Miso soup, pot stickers, bento boxes. Just all around the best food ever. Sometimes it's just fun to sit at the counter and watch them make the sushi-you are watching masterpieces being created before your eyes. Sadly, my beloved half off sushi Tuesdays has come to an end and now we are going through all sorts of sushi withdraws. 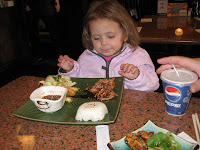 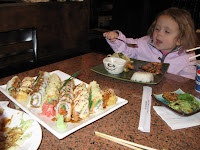