So Melissa and I have had a debate this week, about quality of pant and my weight. I first tore one pair of pants while leaning to check on Heidi, not like your normal seam tear but in the middle of the pants leg. That in and of itself was enough for me to say… it is just some cheap pants, but with today I tore my last pair of church pant when bending over to pick up the baby I am insisting I am a fatty fat fatso. The pants were from Walmart and were rather loose fitting and i was kneeling down and getting up when they tore. So if some one wants to help decide it would help me out!
2 comments:

I donno what to do, I feel like my feelings are not important. I try to fit in with my new family but it seems like any time I talk to anyone in my new family they are only talking about themselves. I feel that no matter what I choose to do or say people take offence with it. I feel that I was never wanted around in the beginning and I am still not wanted in this family. I went looking at others blogs of those I am related to and only one mentions the fact they have a brother or that they have a niece, (she’s the one who lives far away and who we rarely get to see). It is almost as if we don't exist to them. I am worried about Char; he has mentioned to me many times how he is the black sheep in his family. He says he feels like he has never fit in with anyone in his family, he doesn't run races, he says he feels he isn't smart like everyone is they have like super advanced degrees, and he is barely slipping by. He feels like he tries to talk to his sisters about what interests them and is genuinely interested, but he feels that no one is interested in the things he is doing, his dreams, wants, and needs. He has mentioned many times how he feels no one will let him grow up.
I have seen this; people seem to like bringing up all the terrible horrible things about his past, and rubs his nose in it. I catch him looking upset about it more and more, it breaks my heart how mean people can be to him. It feels like no matter what he does it is not good enough for his family, he graduated really early and is working a job no one could very well. He got married in the temple, has an adorable baby girl, and is going to graduate school soon. What more can he do to make them proud of him? Why does he balk at going down? He feels no one cares about him and his feelings. I worry about him so much. I am hesitant to go down as well because, like him, I feel like an outsider, tolerated but not accepted. I am sorry I am rambling but this past week has been so hard for him, it is like a confirmation of all his fears that next to no one in his family cares for him and his new family. I try defending him because he is so afraid of becoming what everyone brings up about him, that he is a monster and he beats his sisters up, or he chases them with knifes. He won’t defend himself against what people say, because, to him he is a monster and has every right to be hated.
1 comment:

Is so fickle, today when out shopping; which by the way has to happen on Saturday because I like shopping with Charlie. It is weird to go shopping or anywhere alone, especially with baby girl. But any way weather, I mentioned that we might want to bring an umbrella but Charlie thought that it wouldn't rain. He's so funny, as we walked into Sam’s Club it started to sprinkle and we got a little wet. However, it had stopped by the time we got out, but when we went to Wally’s nothing. By the way Heidi was asleep when we went in the store and I looked over and Charlie was tickling Heidi's foot!!! She woke up and when we went down the baby isle we finally found this rattle we were looking for. Heidi’s eyes lit up, she was having so much fun. Charlie took off her baby berkah and she was so interested in everything! Char would push the cart back and forth, she smiled and did her happy giggles! When we went out it was starting to sprinkle and by the time we got into the car there were huge rain drops as we were driving south-like 2 blocks-it stopped and the sun came out! Oh how crazy Utah weather is, if you don’t like it wait 5 minutes!
No comments:

So we gave Heidi her first bath in a long time, (she has been showering/ sponge bath due to her hatred of water early on). It was the cutest darn thing in the world, she was squealing with delight and splashing everywhere and smiling big time, it was probably the most fun she has had in a long time. On a side note, she is really sick right now she has been coughing a ton, sneezing and just miserable all the time.
Charlie is starting to apply to many schools all over the country, looking into Texas and Georgia. I say NO to Washington or California. Also Charlie is thinking of enlisting because they will pay for a good portion of grad school loans and a huge sign on bonus can get us out of debt. He feels that it would be a great opportunity to vent a lot of life’s little frustrations. He has mentioned a desire to get an MBA or maybe still go on to get a degree in counseling. Just keeping our options open .
1 comment: 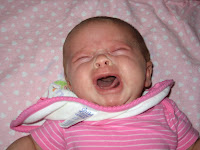 So, this week has been stressful besides the aforementioned things, Heidi has gotten her shots. Which was fine for me because I made Charlie do it (insert evil Russian laugh) and it was all sorts of hard for him, due to a failure on both our parts when he took the diaper bag there were two things that were missing that are the difference between happiness and pain!

Those important things were a bottle and a pacifier, So just before the doctor came in the baby started to scream and demand a bottle but when Charlie looked into it he couldn’t find one (gasp) nor could he find a pacifier (double gasp) so Heidi was screaming before the shot and wailing after the shot all the way home. While most babies tend to be super sleepy afterward, Heidi was wide awake, not crying just looking around. So life has been interesting while Heidi is now scared of Charlie half expecting him to give her some pokes.
3 comments: