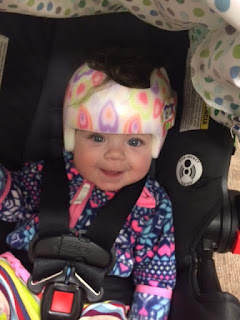 December 23- Our Friday started out at 5:00am! Anastasia had two doctor appointments in Ogden then Salt Lake that morning. So we got Rory and Anastasia up and ready to go. Anastasia was wide eyed and bushy tailed. Rory was less then happy to be up so early.

We drove down to Ogden for Anastasia's first doctor's appointment.  Since she was a preemie with respiratory distress syndrome and still weighs less than 20 pounds she qualifies for the Synergis shot. This shot gives her an immunity boost and lowers her risk for getting RSV. She'll have to have one shot every 28 days until May to be effective. The three of us had to wait there for nearly a hour after the shot to make sure she didn't suffer an allergic reaction from it.  (Which she didn't). So from now on, we can just get the shot and go.

Next we drove to her helmet appointment. She's gone from 20 degrees off down to 10 degrees off. She's gone through a bit of a growth spurt. Which is a double edge sword, on one side yeah, she's growing. On the other side, she's outgrowing her helmet before it's had time to fully repair her head. If we keep this one on much longer it could impact her brain growth. If we don't get a new one her skull could remain deformed. We have to wait for the Cranial-Facial Surgeon to see if her occipital bone (eye socket) is still flat, which could cause her eye to pop out. Fun things to think about, I know.

After that we went to grandma's for the weekend. Rory had fun playing with Cousin G. Grandma bought a pack of mini balls. I put them into a box, then placed Rory into the box full of balls. Ta-Da, mini ball pit. He LOVED it!

After we got the babies settled, Grandma watched them while I took Heidi Anne to go shopping for presents. She got socks for Rory and Anastasia and a movie for Char and me. It was packed! I'm never shopping the day before Christmas Eve / before a big snow storm again! 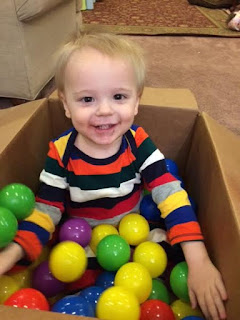 After we got back to Grandma's house, Heidi Anne ran some errands with Grandpa and brought back pizza for our traditional Pizza Night Friday! The kids went to sleep not to long after dinner.

December 24-The kids all got up super early. Call it a dry run for Christmas morning. Grandpa made a special breakfast of Eggnog French Toast. Heidi Anne helped Grandpa make it. By the time we all sat down to eat, Char came in from work. It was 6:30 am. There we all were sitting down ready to eat. (Good timing on his part). 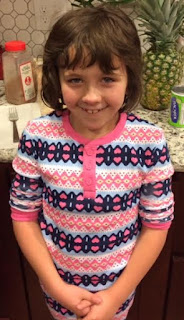 After breakfast, Char went down to sleep and the kids went to play. Rory found one of the cousins presents and feel in love with it, it was a stuffed animal dog. 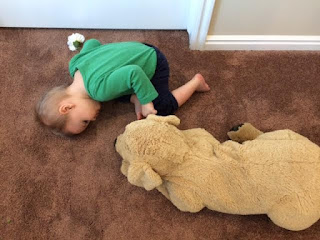 He kept petting it and repeating "Doggie!", which is amazing. But sadly, it wasn't his present, so we put it away before he became anymore attached to it. He then found a spatula and played in the ball pit again. Anastasia just rolled around. She did a LOT of rolling. She run into a wall or a piece of furniture and cry until she rescued herself or someone moved her back to the middle of the living room. 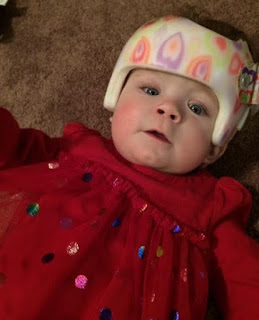 Later on in the day Char woke up and family started arriving to Grandma's house. The kids played with cousins and had a fun time. Everyone made their own little personal pizzas, which took some time given there were 20 people!

After dinner, the kids (with the help of the grown-ups) did a nativity play. Heidi Anne was Joseph this year, (she was Mary last year) and Anastasia was baby Jesus.

Then we had a gift exchange for the grown ups. The kids opened up pajamas. Finally, everyone shouted up the chimney to Santa. This is a British tradition where on Christmas Eve, you shout up the chimney to let Santa know what you want for Christmas. This year, half of the children made last minute changes to their wish list. Seriously, the very last second they changed their minds on us. 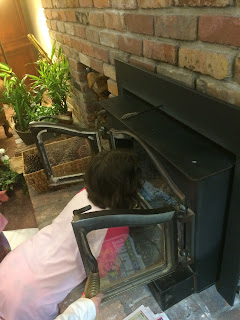 Oh, well! I told Heidi Anne Santa had already left the North Pole with the wish list she had written at school. Also, he was coming to our home in Wyoming and not to Grandma's house. So no need to get up ridiculously early. 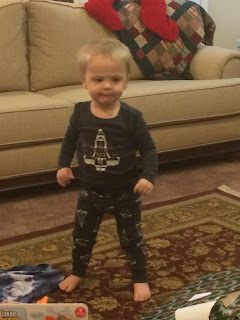 December 25-They got up ridiculously early. They did the thing! 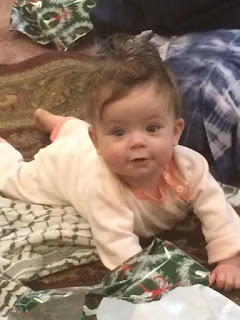 We opened what presents were at Grandma's house and some stockings. It finally snowed over night and into the morning. Grandpa shoveled the walk, while Char dug out and loaded up the cars for the drive back home. 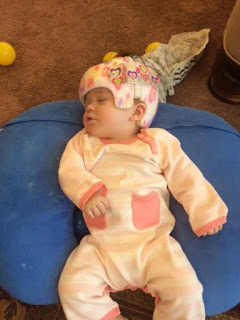 Little Anastasia was out like a light. Exhausted from the lack of sleep the night before (not even 1 year old and knew something was special) and the getting up early part. 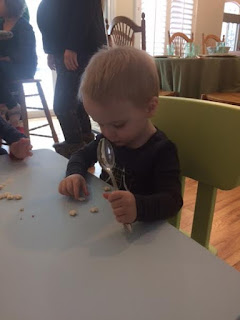 By 9:00 am most of the family was back at Grandma's for a family breakfast. Rory and Cousin G were snacking while everything was cooking.

After breakfast (more like brunch...well, more like 11:00 am) we headed home. It took me over 2 hours to drive back home though the snow.

The kids were excited to see their Santa presents and unwrap their presents. Rory went straight for Anastasia's gift of a stroller / walker and baby doll, he couldn't be separated from it. 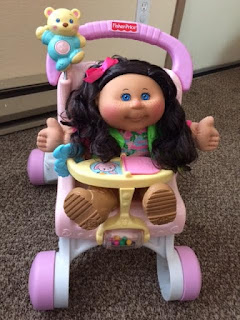 Until she went for his Santa gift. Then he was all over his present.
We spent the rest of the day playing, watching a movie, until Daddy had work at 5:00 pm. Then we played some more. 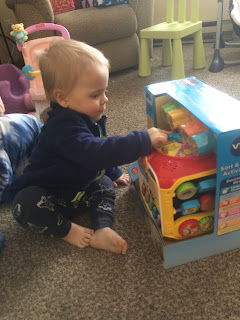